Early in 2019, we shared with you the story of Francis Xavier Huu Tinh, a seminarian at Stella Maris Major Seminary in Nha Trang, a coastal and mountainous diocese of Vietnam. Francis first felt a calling to the priesthood in high school, after he witnessed a friend tragically die in a motor accident. While it may come as a surprise, those who have felt it, from seminarians to Pope Francis, say the call to religious life is a blessing from God.

Countless seminarians around the world have told stories similar to Francis’. There may be a moment in their lives in which they feel profoundly challenged or tested, and their understanding of and response to the circumstances can precipitate that feeling of being called to religious life.

Francis’ classmate at Stella Maris, Peter Hoang Minh Trung, was even younger when he made his mind up. ‘I was six years old when I received an award from my parish priest for my study in catechism,’ says the fourth-year theology student. ‘He asked me what I wanted to do for a job and I consciously answered that I wanted to be a priest. From that moment my dream developed day by day.’

Pope Francis spoke about the phenomenon of priestly vocation in his message on the 56th World Day of Prayer for Vocations in May 2019. ‘The Lord’s call is not an intrusion of God in our freedom; it is not a “cage” or a burden to be borne,’ he said. ‘On the contrary, it is the loving initiative whereby God encounters us and invites us to be part of a great undertaking. He opens before our eyes the horizon of a greater sea and an abundant catch.’ 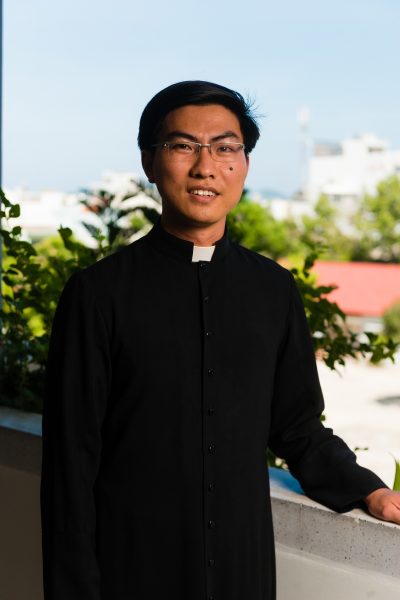 The World Day of Prayer for Vocations is a day on which the Church concentrates its attention on vocations to the ordained ministries, to religious life in all its forms, and to mission ad gentes. With numbers of vocations generally declining around the world, this is an important day on the Church’s calendar.

In developing countries like Vietnam, pursuing a calling to priestly life comes with significant personal sacrifice. Economically it is not an easy decision for seminarians like Francis and Peter, who come from low-income families. With their parents struggling to pay tuition fees and other daily costs, the seminarians’ ability to transform their vocation into a livelihood is so often reliant on the support they receive from benefactors. Each of the young men at Stella Maris is supported by Catholic Mission’s work with Church leaders and the contributions of our faithful supporters.

Father John Baptist Dinh Ngo Tien, Rector at Stella Maris Major Seminary, shares how these contributions have made a difference. ‘We ended our academic year on June 1, 2019, with 35 theology graduates, and of those, 17 are taking an exam for the Bachelor of Sacred Theology granted by the Pontifical Urban University in Rome, with which Stella Maris is affiliated. Francis Xavier Huu Tinh is one of these 17 students.’

It is a blessing that motivates Peter every day.

‘Firstly, I hope to sincerely say thanks to you all, our supporters in Australia,’ he says. ‘You are so generous. Your support helps us so much on the journey to become priests.’

He has a clear vision for his purpose as a priest and says his seminary training is building the best foundation to achieve his goals. ‘I think that to be ordained is to be chosen by God for a special mission. Being a priest is God’s grace. I want to become the one who brings the beauty and the joy of the Gospel to the people so that they can be saved.’

Peter wants to reach young people with his message. ‘I am most interested in the ministry for the youth. The youth is the future of the Church. They need a firm basis of Catholic faith so that they can become good Catholics in the future’.

As someone who was influenced by his own parish priest, Peter believes his ministry could have positive impacts on vocations in his home. ‘The seed of the religious vocation can easily be sown into the hearts of young people to work in the vineyard of the Church.’